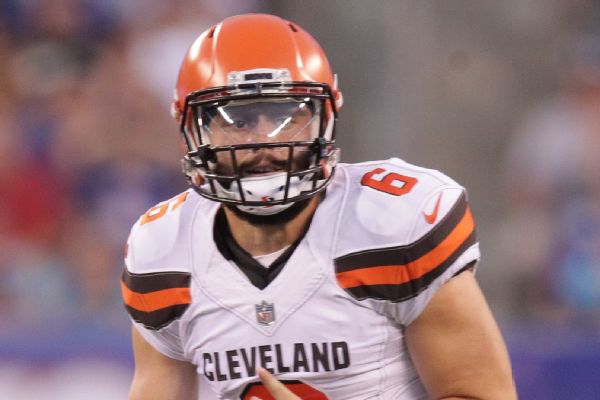 Cleveland Browns’ fans waited a long time for their team to get back into the playoffs, and it was well worth the wait. The Browns beat-up on their bitter rivals last week in a 48-37 win over the Pittsburgh Steelers that wasn’t as close as the score indicated. But now is not the time to be satisfied with that victory, as Cleveland travels to Kansas City to take on the top-seeded Chiefs in an AFC Divisional game on Sunday afternoon. This will also feature a pair of former Big 12 quarterbacks in Baker Mayfield and Patrick Mahomes. Mayfield played in Lubbock for Texas Tech as a freshman walk-on in 2013 but then transferred to Oklahoma, where he would eventually win the Heisman Trophy. Mahomes played three seasons for the Red Raiders before declaring for the NFL Draft after his 2016 junior season and being selected No. 10 overall in the 2017 draft by Kansas City.

Last week in Pittsburgh, the Browns raced out to a 28-0 first quarter lead and that was more than enough to eliminate their AFC North rivals. As for Kansas City, they haven’t played a meaningful game since Dec. 27 when they extended their winning streak to 10 games with a 17-14 win over the Atlanta Falcons. The following week, the Chiefs rested several starters including Mahomes and fell at home to the L.A. Chargers 38-21. With the No. 1 seed and a bye last week, many players will have gone three weeks without playing. Despite sitting out the Jan. 3 setback to the Chargers, Mahomes finished the regular season with 4,740 passing yards and 38 touchdowns.

The Chiefs come in as 10-point favorites, but they haven’t covered the spread since beating the New York Jets on Nov. 1. It’s the first-ever playoff meeting between the Browns and Chiefs, but they did play in Week 9 of the 2018 regular season. Kansas City won that game in Cleveland 37-21 behind 375 yards and three touchdown passes by Mahomes in what was his first year as a starter. That was Mayfield’s rookie year and he threw for 297 yards, two scores and a pick. The Browns are 5-2 against the spread in the past seven meetings. Should Cleveland win, it would travel to either Baltimore or Buffalo for the AFC Championship Game, while Kansas City would host either the Ravens or Bills with a victory.

The Browns were down a handful of coaches last week due to COVID-19 protocols, including head coach Kevin Stefanski. Also out were Pro Bowl guard Joel Bitonio and cornerback Denzel Ward. The Browns, who had lost 17 straight games in Pittsburgh, scored as many points in the first quarter (28) as they did during the first quarter of their previous 13 games combined in Pittsburgh. Mayfield threw for 263 yards and three scores and Kareem Hunt rushed for two touchdowns. Cleveland should regain several players off the reserve/COVID-19 list including Bitonio, while Stefanski returned to practice on Thursday. Ward and Kevin Johnson have been activated and will provide depth to a secondary that intercepted Ben Roethlisberger four times last Sunday. Receiver KhaDarel Hodge was also taken off coronavirus protocols. Hunt will have some motivation for this game after the Chiefs cut him during the 2018 season after video surfaced of him kicking a woman. Kansas City selected Hunt in the third round of the 2017 draft and led the NFL with 1,327 rushing yards as a rookie. The Browns listed four players as questionable: offensive tackle Jack Conklin (hamstring/knee), linebacker B.J. Goodson (shoulder), and tight ends David Njoku (hamstring) and Stephen Carlson (groin).

The Chiefs have plenty of weapons including tight end Travis Kelce, who set an NFL record for tight ends with 1,416 receiving yards. The team did rule out receiver Sammy Watkins (calf) and linebacker Willie Gay (ankle) on Friday. Running back Clyde Edwards-Helaire (ankle) was listed as questionable. The Chiefs ranked sixth in the regular season with 29.6 points per game and No. 1 with 415.8 total yards per contest. The Browns have been allowing a ton of points to their opponents, which was also why they had to hang on in the wild-card game with the Steelers staging a comeback. Kansas City scored at least 31 points in all of their victories last postseason en route to winning the Super Bowl. The Chiefs secondary was much better this year, allowing 236.2 yards a game through the air, but the rush defense is something to look out for. They allowed 122.1 yards per game and the Browns have a terrific 1-2 punch in the backfield.

This could be shootout like we saw last week in Pittsburgh, only I don’t see the Chiefs getting behind by 28 points. Cleveland has a lot of momentum coming into this one and the Chiefs haven’t covered a spread since the day after Halloween. The Browns offense will keep this one close.