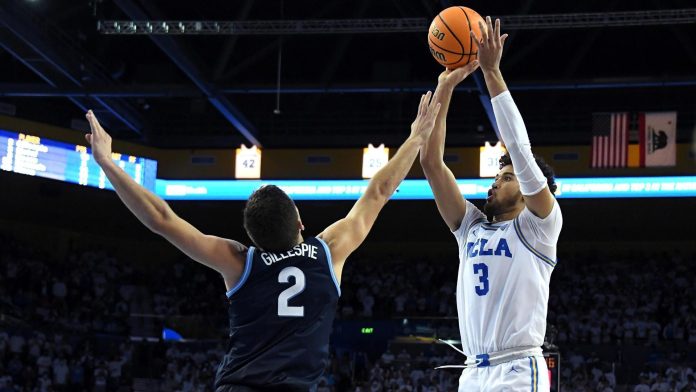 The top two teams in the Pac-12 and Final Four contenders, will meet for the first of two games within 10 days beginning on Tuesday night, as the UCLA Bruins host the Arizona Wildcats in Los Angeles. The Wildcats lead the conference with a perfect 6-0 record and are an impressive 11-5-1 ATS this season, however, just 3-4 ATS in their last seven. Their lone loss on the season came before Christmas in a 77-73 setback to Tennessee. In Arizona’s last 10 games, they are averaging 86.9 points, 38.1 rebounds, 20.1 assists, 6.6 steals and 6.5 blocks per game while shooting 50.8% from the field. Their opponents have averaged a mere 68.3 points.

UCLA hasn’t been as impressive during that stretch, but they are still 9-1 in their last 10, while averaging 72.8 points, 33.0 rebounds and 12.5 assists per game while shooting 43.5% from the field. The Bruins are coming off a couple of road wins out East, beating Utah 63-58 and Colorado 71-65 to stay within a game of Arizona. UCLA has won and covered each of the last five meetings with the Wildcats and are 2-point home underdogs in Tuesday’s contest. These two teams will meet again in Tucson on February 3rd.

Arizona is coming off an easy 96-71 road win at the California Golden Bears after winning at Stanford by 27 just three days prior. Arizona’s long range shooting has not been great this year, but they did manage to make 11-of-27 against Cal. They dominated on the boards, outrebounding the Bears 46-37. Christian Koloko posted a double-double of 19 points and 13 rebounds and is part of the second-tallest team in the country. The Wildcats have 6-11 Azuolas Tubelis and the 7-1 Koloko in their starting frontcourt. UCLA’s tallest player is reserve Myles Johnson at 6-10. Arizona ranks eighth in both adjusted offensive and defensive efficiencies.

Since losing to Oregon on Jan. 13, the Bruins have gone 3-0 straight up (1-1-1 ATS), with wins over the Oregon State Beavers, Utah Utes, and the Colorado Buffaloes last Saturday on the road. Johnny Juzang and Javier Jaquez Jr. led the way for the Bruins with 23 and 14 points, respectively. They might not have the stats or the height that Arizona does, but they do have experience in going all the way to the Final Four two years ago. The Bruins get to the line a lot, ranking No. 1 in the Pac-12 in terms of free-throw attempt to field goal attempt ratio. The over is 8-2 in UCLA’s last 10 home games.

Experience doesn’t always win big games like this. UCLA does not have enough height to bang with the Wildcats, but this will still be an entertaining game. If Arizona can make some 3’s, they’ll win this one.