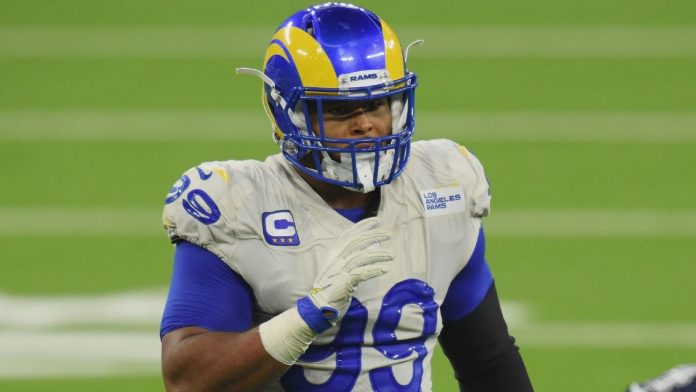 Once the NFC Championship game kicks off Sunday afternoon in Los Angeles, we’ll already know will represent the AFC in the Super Bowl in two weeks. The sixth-seeded San Francisco 49ers head to L.A. to take on the fourth-seeded Los Angeles Rams for the third time this season. Both teams survived a wild Divisional Round last week to get here, as the 49ers beat the top-seeded Green Bay Packers 13-10 without scoring an offensive touchdown. Robbie Gould kicked a 45-yard field goal as time expired. The Niners have owned the Rams over the last three seasons, winning all six regular season matchups. This year’s season sweep included a 31-10 home route and a Week 18 27-24 win after San Francisco trailed 17-0. That win got the 49ers into the playoffs and kept the New Orleans Saints out.

The Rams almost blew their chances at hosting the NFC title game after building a 27-3 lead at Tampa Bay last week. Tom Brady and the Bucs came all the way back to tie it until Matt Gay’s 34-yard field goal on the final play sealed it. The game-winning field goal was set up by a big 44-yard completion from Matt Stafford to Cooper Kupp. Stafford looks to rebound from too shaky outings against the Niners this season. He threw two interceptions in each of the losses to San Francisco. Stafford was picked off eight times over the Rams’ final four regular-season contests, but has yet to throw one in the two playoff wins. The Rams are 3.5-point favorites with a total of 45.5 this Sunday.

The 49ers beat Aaron Rodgers and the Packers for the fourth consecutive time in the postseason thanks to some terrific defense and Jordan Willis’ blocked punt that safety Talanoa Hufanga returned for a touchdown. Jimmy Garoppolo wasn’t great, completing 11-of-19 passes for 131 yards, no touchdowns and an interception. Gould also saved the day, nailing two field goals, including the game-winner. He has now made all 20 of his career playoff field goal attempts. Garoppolo has failed to throw a touchdown pass in both of San Francisco’s playoff win. Last week, the Niners opened the game with four straight three-and-outs for the first time since September 2009. The 49ers are 4-0 against the spread in their last 4 games as an underdog. Left tackle Trent Williams (ankle) didn’t practice all week and is listed as questionable for Sunday’s game, but insists he’ll play.

Four second half turnovers let the Bucs back in the game last week, but the Rams still managed to prevail. Stafford earned just his second career playoff win, finishing with 366 passing yards and two touchdowns, while running for another. Kupp finished with 183 receiving yards and a touchdown. During the regular season, Kupp leads the NFL in receptions (145), receiving yardage (1,947) and touchdown receptions (16) and has 14 catches for 244 yards and two scores in the playoffs. The Rams played without left tackle Andrew Whitworth against Tampa, as he deals with a leg injury suffered in the wild-card round against Arizona. His status is up in the air. Aaron Donald and Von Miller combined for 14 of L.A.’s 17 pressures on Brady. The Rams are 4-1 against the spread in their last 5 games following an ATS win.

The 49ers have owned the Rams over the last three seasons and they will have the backing of the Niner-faithful on the road. Stafford has been decent this postseason, but he was picked-off four times this season against San Francisco. The 49ers defense will prove to be the difference.