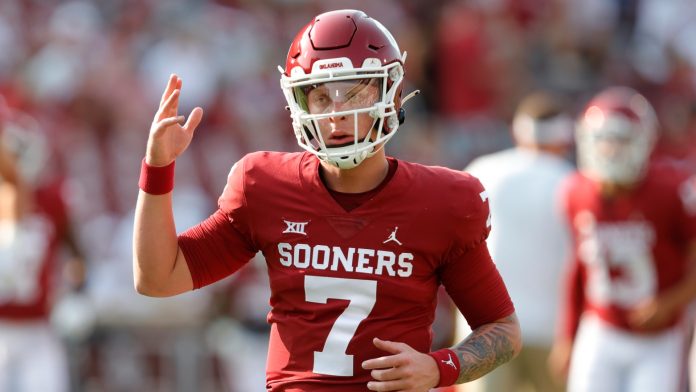 The Oklahoma Sooners haven’t been overly impressive to begin the season, but they are still 3-0 and ranked No. 4 in the country heading into Saturday’s showdown at home against the West Virginia Mountaineers. The Sooners started the season with a lackluster 40-35 win over Tulane before blowing out Western Carolina 76-0. Then last week, the big showdown with old rival Nebraska was tougher than most people thought. Oklahoma came into that contest over a three-touchdown favorite, but struggled in a 23-16 victory. Now conference play begins and the quest to get back into the College Football Playoff.

The Mountaineers have rallied since dropping their opener 30-24 at Maryland on Sep. 4. West Virginia has won and covered the spread in each of their last two games including a win over rival Virginia Tech 27-21 last Saturday. Head coach Neal Brown is in his third season running this program and West Virginia is slowing showing some progress. The defense has been outstanding the last two weeks, allowing just 424 yards of total offense combined.

The meeting last year was canceled to due various Covid issues with both teams. Since the Mountaineers joined the Big 12 in 2012, they have lost all eight meetings with Oklahoma. The Sooners have won the last six by an average of over 20 points per game. Not surprisingly, the Over is 7-1 in the last eight meetings. Oklahoma is 17-point favorites in this year’s meeting with a total set at 56.

West Virginia is coming off a win over No. 15 Virginia Tech at home, their first win against a ranked opponent this season, one week after a 66-0 blowout victory over FCS Long Island University. The Mountaineers run game led the way against the Hokies, with Leddie Brown rushing for 161 yards and a touchdown on 19 carries. In the season opener, Brown rushed for 73 yards and a pair of TDs against Maryland. Defensively, West Virginia is allowing 17.0 points per game, ranking them 34th in the country. The Mountaineers are 5-3 against the spread in its last eight games overall. West Virginia will host Texas Tech next week.

Oklahoma’s defense made up for the lack of offense in last week’s win over the Cornhuskers. The Sooners recorded five sacks and an interception and in two games against FBS teams this season, Oklahoma has already forced opponents to commit four turnovers. Oklahoma is doing a fine job protecting quarterback Spencer Rattler. The Sooners have allowed just one sack to FBS teams this season. Rattler is completing 74.7 percent of his passes for and Oklahoma offense that is averaging 31.5 points per game. Against Nebraska, Rattler was 24-of-34 for 214 yards and a touchdown. Oklahoma will be without cornerback Woodi Washington and potentially without receiver Brian Darby for the game. Washington and Darby were both hurt in the Sooners’ win over Western Carolina and missed the Nebraska game.

West Virginia is improving but I don’t think they’ll be a match for Oklahoma. The Sooners have been getting bashed for their lack of offense so far and I believe they come out firing and lay it to the Mountaineers.