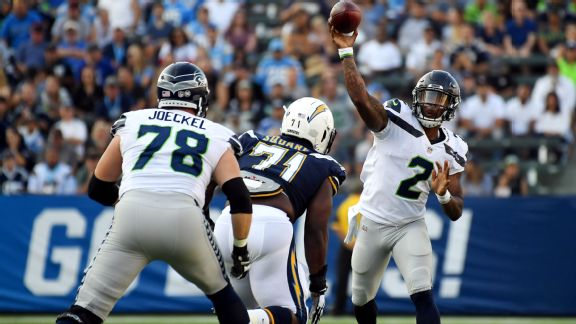 A couple of teams that usually perform well in preseason action will take the field on Friday night as the Seattle Seahawks host the Minnesota Vikings from CenturyLink Field in Seattle. Minnesota struggled their way to a 17-10 victory over the Buffalo Bills in Week 1, while the Seahawks posted the most points of any team in a 48-17 drubbing of the Los Angeles Chargers. Pete Carroll has one of the best preseason records in the league, but Week 2 is not his strongest part of the preseason. He’s 6-2 in Week 1, 5-2 in Week 3, 5-2 in Week 4, but just 3-4 in Week 2. As for Mike Zimmer, his Vikings are an impressive 13-1 in preseason games during his tenure.

The Vikings 17-10 win over Buffalo certainly wasn’t pretty last week as the offense totaled just 266 yards of offense. Case Keenum was 11-of-16 for 121 yards, but couldn’t get his team into the endzone. The running game behind a weak and banged-up offensive line managed just 90 yards on 29 carries, but rookie running back Dalvin Cook recorded 43 total yards on nine touches. The Vikings defense performed well, though, recording three sacks and holding the Bills to 4-of-15 on third down conversions. The Vikings defense, which was one of the best units last season, is already off to a strong start.

Russell Wilson played only the opening drive last week, but his backups did very well, finishing a combined 22-of-28 for 338 yards, a touchdown and an interception. Seattle recorded 26 first downs against L.A. and was 6-of-13 on third down and 2-of-3 on fourth downs. They also have a lot of depth at running back position where Thomas Rawls and Eddie Lacy are battling for the starting job. Both saw limited action in Week 1 with Lacy running four times for 10 yards, while Rawls had just five yards on two carries.

Both of these teams play hard in the preseason, but you can’t ignore Minnesota’s record in these games. 13-1 is no fluke and if you’re giving me 3.5 points, I’m taking it all the way to the bank. I know Seattle is tough place to play, but it’s preseason. The 12th Man won’t be as loud for a Friday night exhibition game.