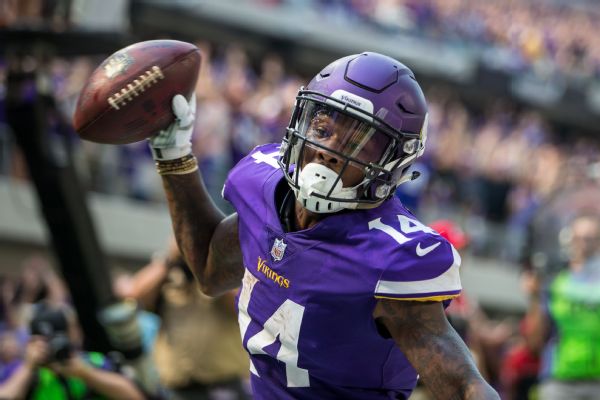 The first of two NFC Divisional Playoff games pits a couple of strong defenses against each other when the Minnesota Vikings visit the San Francisco 49ers on Saturday afternoon from Santa Clara, Cal. The Vikings finished the regular season 10-6, but were the No. 6 seed and biggest underdog in wild card weekend when they went to No. 3 New Orleans. Minnesota (+8) dug out of an early hole and won the game on the opening drive of overtime when Kirk Cousins threw a four-yard fade to tight end Kyle Rudolph for the winner. It appears oddsmakers are taking them more seriously, as they come into this contest against the No. 1 seed 49ers as only seven-point underdogs. San Fran edged out Seattle on the final NFL game of the regular season to win the NFC West and earn the top seed in the conference. The 49ers have won the Super Bowl five times and were the top seed in four of those seasons. It’s the first postseason meeting between the franchises since Jan. 3, 1998 when the 49ers won 38-22 at the old 3.com Park but would then lose in the NFC title game to Green Bay. San Francisco visited Minnesota to open the 2018 regular season and the Vikings won 24-16. Kirk Cousins threw for 244 yards and two touchdowns in his Vikings debut, while Jimmy Garoppolo was just 15-of-33 for 261 yards with a touchdown and three interceptions. The home team is 5-2 against the spread (ATS) in the past seven meetings and the under has cashed in six of those. The winner play either Seattle or Green Bay in the NFC title game. The Vikings would visit either the Seahawks or Packers, while the 49ers would host it if they win.

It appeared as if Rudolph committed offensive pass interference by pushing off the defender last week in New Orleans, but it wasn’t called and there was no way it was going to be changed by video review. It’s the second straight postseason the Saints have been on the wrong end of a controversial call. Cousins, who has a history of not showing up in big games, was on point Sunday, throwing for 242 yards with no turnovers. Dalvin Cook had missed the previous two games due to injury but returned and rushed for 94 yards and two scores. The Minnesota defense, which allows 18.9 points a game, shut down Brees and the Saints in the second half. The Vikings are 1-5 ATS in their past six after a win.

This will be the first postseason start for Garoppolo and is coming off an excellent season in which he threw for 3,978 yards with 27 touchdowns and a 102.0 rating. San Fran has the No. 2 rushing attack in the NFL – behind only Baltimore – averaging 144.1 yards a game led by Raheem Mostert’s 772 yards and eight touchdowns. They also have the league’s best tight end in George Kittle, who caught 85 passes for 1,053 yards. The defense has faded a bit down the stretch, allowing 31.7 points in their final four contests. The Niners have covered only six of their previous 26 games as favorites.

If Minnesota can win at New Orleans, then why not San Francisco? The Vikings are very good at stopping the run and getting to the quarterback and this is Garoppolo’s first playoff start. Cousins quieted the doubters last week and could have another big game against a struggling 49ers defense. I’ll take the points.