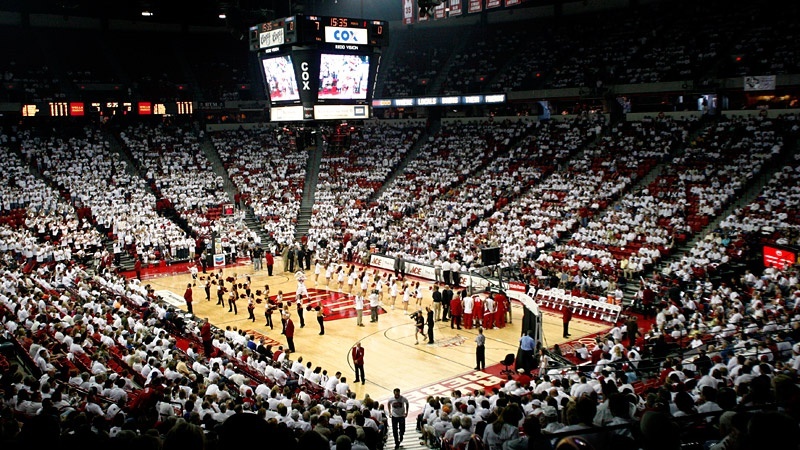 The San Diego State Aztecs can almost wrap-up the Mountain West Conference before February even gets here, but they are aiming at bigger goals than that. The fourth-ranked – and only unbeaten team left – put their winning streak on the line in Las Vegas against the UNLV Runnin’ Rebels on Sunday afternoon. The Aztecs are coming off a 72-55 win over lowly Wyoming on Wednesday, tying for the best start to a season and also consecutive wins. The 20-0 start matches the best beginning to a season in school history set by the Kawhi Leonard-led 2010-11 squad that finished 34-3 and advanced to the Sweet Sixteen. The school also went to the 2013-14 Sweet 16 in a season in which they won 20 games in a row. The Rebels are in second place in the MWC – 2.5 games behind SDSU – and have won seven of their last nine despite dropping their last game 86-72 to in-state rival Nevada on the road. UNLV has won six straight home games, but have been dominated by the Aztecs there recently. San Diego State is 9-1 against UNLV at the Thomas & Mack Center since 2014, including a 63-55 victory in the conference tournament last spring. The all-time series is tied at 36-36, but San Diego State has won 30 of the last 40 meetings and 15 of the past 16.

The Aztecs are sitting at 20-0 mainly because of their terrific defense, which has held the last three opponents to 55 points apiece. They rank fourth in scoring defense (56.7) and 3-point field goal percentage defense (27.4) and fifth in field goal percentage defense (36.7). Offensively, Washington State transfer guard Malachi Flynn leads the team in scoring (16.6), assists (5.1) and steals (1.8) and has scored 10 or more points in 19 of the 20 games and is hitting 49.3 percent from the field over his last six games. Yanni Wetzell had his sixth-straight double-digit scoring game with 14 versus Wyoming and is second on the team at (12.3). The Aztecs will be at New Mexico on Tuesday.

Junior guard Amauri Hardy and sophomore guard Bryce Hamilton scored a combined 49 of UNLV’s 72 points in the loss to the Wolfpack this week and are 1-2 in scoring for the team. Hardy leads at 15.1, while Hamilton is averaging 13.5, but 21.4 points during Mountain West play. Hamilton busted out with a 35-point outing in a win over the Lobos eight days ago. The Runnin’ Rebels started 4-8 under first-year coach T.J. Otzelberger and have found themselves over .500 with wins in seven of their last nine. Junior forward Cheikh Mbacke Diong leads the team in rebounds (9.0) while also averaging 8.9 points. UNLV will be at Colorado State next Saturday.

San Diego State is obviously the better team, but they will get the best UNLV has. The Rebels have been playing well lately, especially at home and eight points is too many to lay on the road.