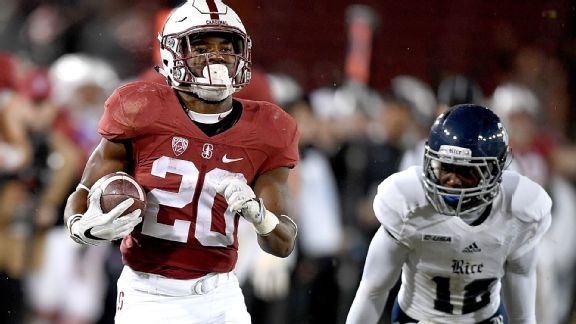 The Stanford Cardinal might have lost one of the best all-around players in College history, but that doesn’t mean they will take a step back and start rebuilding. The Cardinal will start the season ranked 14th in the country and take on the Rice Owls from Sydney, Australia on Saturday night (Sunday in Australia). Stanford beat Rice 41-17 in its regular-season finale last season as Christian McCaffrey gained 271 all-purpose yards and reserve running back Bryce Love contributed 111 yards on seven carries.

With McCaffrey taking his talents to the NFL, the diminutive Love is primed for a breakout junior season alongside senior quarterback Keller Chryst, who injured his knee during Stanford’s win over North Carolina in the Sun Bowl but is ready to go now. Chryst has a solid group of receivers in JJ Arcega-Whiteside (24 catches, 5 TD’s), Trenton Irwin (37 catches) and tight end Dalton Schultz (20 catches), but Love is expected to receive the bulk of the workload after averaging 7.05 yards per carry last season. The Cardinal bring back a veteran offensive line and a secondary that could rank among the best in the nation. The stellar secondary is led by cornerbacks Quenton Meeks and Alijah Holder and safety Justin Reid, while defensive tackle Harrison Phillips is looking to build on a strong junior season (6.5 sacks and 9.5 tackles for a loss) and help with the loss of Solomon Thomas. Stanford is 5-1 in season openers under head coach David Shaw, with the lone loss coming at Northwestern in 2015.

Rice is coming off a three-win season and has been going down ever since they won 10 in 2013. They dropped down to eight wins in ’14 and five the next. This could be another rough season as they will be starting a redshirt freshman quarterback in Sam Glaesmann. The Owls allowed 37.3 points per game last season and were picked to finish fifth in Conference USA’s West Division but have a veteran offensive line that returns four three-year starters. Glaesmann will have a group of inexperienced receivers and figures to be rolling out the pocket a lot as he’s a decent runner. Junior running back Sam Stewart, who had six touchdowns last season despite missing nearly seven games due to a knee injury, will help relieve some of the pressure for Glaesmann. The defense struggled big time last season but returns senior linebacker Emanuel Ellerbee, the C-USA preseason defensive player of the year who led the Owls with 10.7 tackles per game as a junior. Nose tackle Preston Gordon, who tied Ellerbee with 3.5 sacks last season, also returns.

This game will be a complete mismatch. If this game was being held at Stanford, the line would be in the 40’s. I don’t care where you play this game, the Owls are no match for the Cardinal. I’ll lay the points with our first College Football free pick of the season.