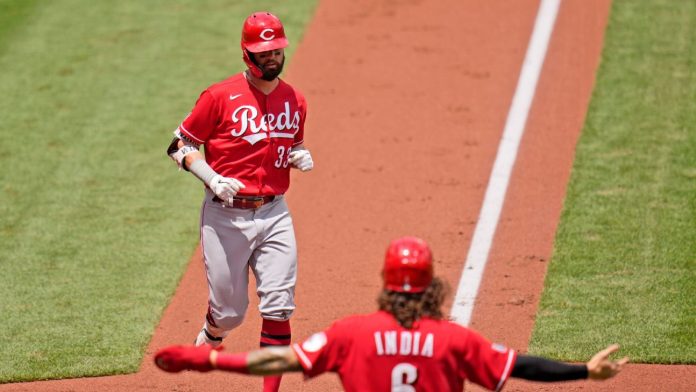 The Major League Baseball trade deadline looms this week and one team that could be sending big players away are the Chicago Cubs. Both corner infielders – Anthony Rizzo and Kris Bryant – are rumored to be involved in a blockbuster deal as the Cubs look to rebuild their organization. Chicago, who host the Cincinnati Reds on Monday, closed the first half with 13 losses in 15 games, including 11 in a row from June 25 through July 6, effectively taking them out of contention. David Bote was activated from the injured list yesterday and homered in the Cubs’ 5-1 victory against the Arizona Diamondbacks, giving Chicago a series win over the worst team in the National League.

The Reds have struggled since the All-Star Break, going 3-6, but did take two-of-three from the St. Louis Cardinals over the weekend to remain in contention. Cincinnati is currently in second place in the National League Central, 6.5 games behind the Milwaukee Brewers. The Reds stranded 13 runners on base and went 3-for-17 with men in scoring position in the 10-6 loss to the Cardinals on Sunday. Cincinnati fell behind 9-3 through four innings, but eventually brought the tying run to the plate late in the game. The Reds are 6-3 against the Cubbies this season including a three-game sweep over the July 4th weekend.

Left-hander Wade Miley will start his 18th game of the year for Cincinnati and has had a solid month. Miley is 2-0 with a 1.29 ERA in July after limiting the New York Mets to two runs (one earned) over 6.1 innings last week. He is 7-4 with a 4.29 ERA in 13 games against the Cubs all-time.

Kyle Hendricks get the nod for Chicago and has also been solid in July. The righty has allowed two runs or less in all four starts this month but suffered a 3-2 loss to the Reds back on July 4th. In 20 starts against the Reds in his career, Hendricks is 6-5 with a 4.24 ERA.

I’m backing Miley and the Reds in this one. Hendricks has had issues with the Reds over the last few seasons and Chicago has lost six straight to Cincinnati when he is on the mound. The Cubs could also be a little distracted this week with the trade deadline coming on Friday.