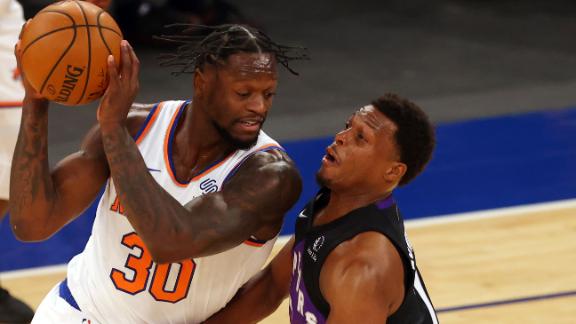 The Toronto Raptors are trying their best to get back into the playoff picture, but will face a red-hot New York Knicks team on Saturday afternoon at Madison Square Garden. Toronto will be facing New York for the second time this month. On April 11, the Raptors rallied in the fourth quarter but fell 102-96. Since that meeting, the Raptors are 4-1 in their last five games and on their second four-game winning streak of the season. They are 7-4 in their past 11 games after losing 13 of 14 games and are one game behind the Washington Wizards for the 10th seed in the East. Seeds 7-10 will have a small play-in tournament to get into the postseason. Toronto is coming off a 114-103 home victory over the Brooklyn Nets on Wednesday and have covered the spread in four straight games. New York is on its first eight-game winning streak in seven years. The Knicks last won nine straight during the 2012-13 season when they reeled off 13 straight victories on the way to a 54-win season and their last playoff appearance. The Knicks are unbeaten since a 101-99 loss at Boston on April 7. New York has won three OT games in the run while averaging 118.4 points and hitting 40.5 percent from beyond the arc. The latest victory came Wednesday in a 137-127 overtime triumph against the Atlanta Hawks when they overcame an 11-point deficit in the third quarter. New York is now in fourth place in the Eastern Conference. New York had lost nine straight in the series before the win on April 11. The Raptors are 8-2 in their past 10 road games in the series and 4-6 against the spread.

Wednesday’s win over Brooklyn was the first time in weeks that Toronto has had Kyle Lowry, Fred VanVleet, Pascal Siakam and OG Anunoby in the same game due to injury/rest/protocols. Siakam had 27 points and nine rebounds, while Anunoby added 25 points. Khem Birch got the start at center and had eight points, seven rebounds and three assists in 24 minutes. Birch may need to play much heavier minutes going forward as Chris Boucher went down with a knee injury in the fourth quarter and is going to miss time. Boucher was having his best season, averaging 13.8 points and 6.7 rebounds. The Raptors return home to Tampa on Monday to take on the Cleveland Cavaliers.

New York outscored Atlanta by seven in the fourth to force OT and then scored the first 10 points of the extra session. Julius Randle had another big game with 40 points and 10 rebounds and is the fifth player in franchise history to average at least 30 points during a winning streak of at least eight games. RJ Barrett contributed 16 points, six rebounds and five assists. Two key reserves may not be available on Saturday for New York. Guard Alec Burks has missed four in a row in the protocols and forward Taj Gibson is in question after suffering an eyelid injury against the Hawks. The Knicks will continue their six-game homestand on Monday against the Phoenix Suns.

The Knicks are on a roll right now, but Toronto is getting healthy. They finally have a full squad and have won four in a row and have dominated this series of late. The Raptors are 7-3 ATS in the last 10 meetings and will be able to keep this one close.