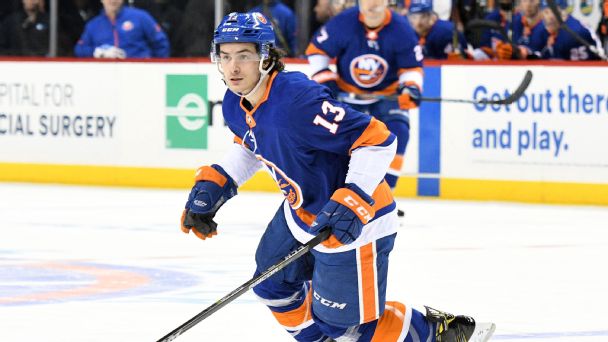 The Stanley Cup Playoffs are back in Long Island – where they belong – for just one series that starts on Wednesday night as the New York Islanders host the Pittsburgh Penguins in Game 1 of their first round series at Nassau Coliseum. The Islanders gained home-ice advantage in this series by finishing in second place in the Metropolitan Division, three points ahead of the Penguins. New York has ridden solid goaltending and defense all season long, but some fans are worried they won’t be able to score enough. New York was the only team in the NHL to surrender less than 200 goals (196), but score just 2.7 goals a game and are ranked 29th in shots (28.8), power play (14.5 percent), and faceoff percentage (47.4). The Penguins are still one of the best offensive teams in the league with captain Sidney Crosby leading the way with 100 points (65 assists), and Pittsburgh scores 3.3 goals a game, while ranking fifth on the power play at 24.6 percent. The teams split their four meetings this season, but all were played by December 10th, with the Pens winning that most recent contest in a shootout 2-1 at Nassau Coliseum.

Crosby has been known to frustrate opposing franchises in his career, and the Islanders are no exception. The future Hall of Famer has 36 goals and 77 assists lifetime versus New York and notched a goal and two helpers in Pittsburgh’s 6-2 win over the Islanders on December 6th. Goaltender Matt Murray has been in front of the net for two of Pittsburgh’s Stanley Cups and had one bad game against New York in October (four goals on nine shots), but stopped 24 shots in a 3-2 shootout loss on November 1st. Jake Guentzel assisted on five goals in the season series with the Islanders and ended with a career-high 40 goals. Evgeni Malkin and Phil Kessel are seasoned veterans with a combined 54 points in the postseason over the last three years.

Mathew Barzal, who won the Calder Trophy as the league’s top rookie last season, tied for fourth on the team in goals scored (18), but his 44 assists helped him lead the Islanders with 62 points. Anders Lee led the team in goals scored at 28 and recorded two of them versus Pittsburgh in the season series. Jordan Eberle had a club-worst -6 plus/minus rating this season, but scored twice in the first meeting versus Pittsburgh while Brock Nelson had three (two goals, one assist) against the Penguins. Islanders coach Barry Trotz, who led the Capitals to their first ever Stanley Cup Championship last Spring, hasn’t named a starting goalie yet, but he can’t go wrong with either. Robin Lehner and Thomas Greiss rank in the NHL’s top five in both goals-against average and save percentage this season and combined for a league-best 11 shutouts.

I’m going to give Game 1 to the home team as the Nassau Coliseum should be rocking for this one. It’s been since 1988 the last time the Islanders had home-ice advantage in a playoff series and the goaltending and defense will come up big like they have all season.