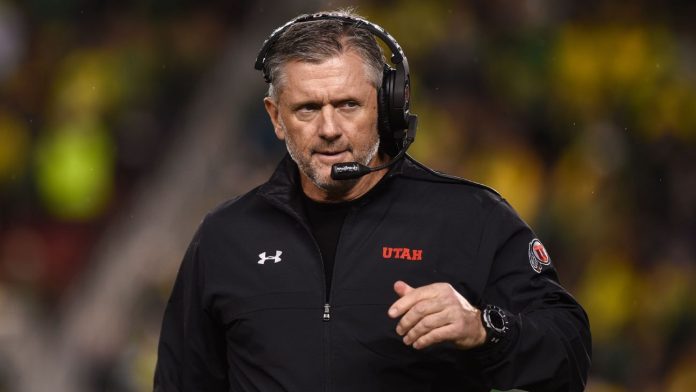 The Pac-12 Championship is two weeks away and we could be seeing a preview of that game this Saturday night. The Oregon Ducks and Utah Utes lead their respective divisions and will collide in Salt Lake City with the Ducks hoping to keep their College Football Playoff aspirations alive. The Utes would love nothing more to spoil that and will be 3-point favorites entering Saturday’s clash. It might come down to which team can stop the run, as Oregon ranks 12th and Utah 18th in the country in rushing yards offensively. This will the Ducks’ toughest opponent since upsetting Ohio State in Columbus earlier this year and might have to beat Utah twice in the next three weeks. If Oregon wins, they are in the Pac-12 Championship Game, but will still have to play a vastly improve Oregon State squad next week to keep their CFB hopes alive. That won’t be easy. Utah can also clinch a spot in the conference title game with a win while giving coach Kyle Whittingham his 142nd win at the school and become the all-time winningest coach at Utah.

The Ducks remained third in the latest CFP rankings on Tuesday and have won five in a row since losing at Stanford on Oct. 2. The latest was a 38-24 home win over Washington State late last Saturday night. Oregon is tied for second in the nation with 31 rushing touchdowns, including 15 in the last four games. They are also fifth in third-down conversion rate at 51.6 percent including 65.9 percent of the last four games. Utah has five of their last six and have scored at least 34 points in all six including a 38-29 win at Arizona last week. Utah has scored 16 of its 27 rushing touchdowns in the last four games. Last year was the first time these two haven’t met since the 2012 season and Oregon leads the all-time series 23-10. The last came in the 2019 Pac-12 championship game in which a Justin Herbert-led Ducks team won 37-15.

It was an easy win for the Ducks over the Cougars last week and the rushing attack once again led the way. Oregon ran for over 300 yards and four touchdowns in the win, but will face a much tougher opponent in Utah. Anthony Brown rushed for 123 yards and a touchdown on 17 carries against Washington State. He’ll be facing a Utah defense that ranks 53rd in the country against the run and allowed Arizona quarterback Will Plummer to run for 50 yards and a score last week. Oregon ranks 12th in the country with 226.5 rushing yards per game and eighth in yards per carry (5.5). Leading rusher Travis Dye needs 92 more yards to reach 1,000 in a season for the first time in his career. The Ducks are averaging 297 rushing yards per game over the last three.

Utah had a heck of a time with the one-win Wildcats last week, pulling out a nine-point victory as 24-point favorites on the road. Cameron Rising passed for 294 yards and two touchdowns without an interception on 19-of-30 completions. Running back TJ Pledger led the Utes ground attack with 119 yards and two touchdowns on 25 carries. The Utes played the game without leading rusher Tavion Thomas, who sat out the game due to injuries. He will likely play this Saturday. Utah’s offense is one of the best in the nation, averaging 35.7 points a game, while ranking first nationally with 6.2 rushing yards per carry and 18th with 214.7 rushing yards per game. Utah is 4-2 against the spread in its last six games overall.

I really want to see a Pac-12 team back in the College Football Playoffs and Oregon is the only chance the conference has. I don’t see Oregon getting through these next three tough games, but if they do, they will be deserving. I’m going to take the points in this one with the thinking Oregon can stop the run better than Utah can. This should be a good one.