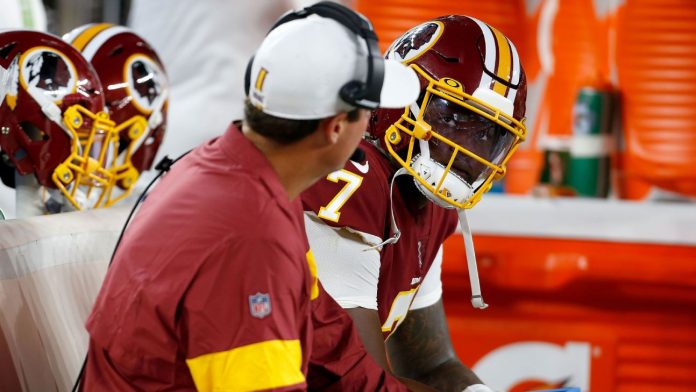 Preview and pick courtesy of RealBookies.com

2019 was a year to forget for the Washington Redskins. The team fired head coach Jay Gruden and sputtered to a 3-13 record. But it’s a new era in D.C., as new coach Ron Rivera looks to inject some life into the Redskins and return to the playoffs for the first time since 2015.

According to Vegas odds-makers, Washington’s over/under win total is set at 5.5. We’ll look at their offseason moves, as well as their schedule this fall, before determining whether the over or under is the smart play.

Washington said goodbye to a number of familiar faces. The team finally traded away their disgruntled OT Trent Williams in a draft-day deal with the 49ers. They also let CB Josh Norman walk, who later signed with the Bills. They lost five corners total including Norman, with Quinton Dunbar being the other big loss among that group when he joined the Seahawks. Along the offensive line, the Redskins lost OG Erick Flowers to a three-year deal with the Dolphins and let OT Donald Penn become a free agent. Furthermore, both tight ends Vernon Davis and Jordan Reed are gone, WR Paul Richardson was cut, longtime RB Chris Thompson signed with the Jaguars, and veteran QBs Case Keenum and Colt McCoy bolted for the Browns and Giants, respectively.

With the first of their eight draft picks, Washington selected arguably the draft’s best player in Ohio State EDGE Chase Young. Young will start right away and should develop into an excellent pass-rusher at the pro level. In round three, the Redskins picked explosive Memphis RB Antonio Gibson who will join the rotation of backs in place. They also took a couple of offensive linemen in the troubled-but-talented LSU OT Saahdiq Charles and San Diego State C Keith Ismael, the former of whom will likely start right away. Other notable picks include Liberty WR Antonio Gandy-Golden and Michigan LB Khaleke Hudson.

The Redskins, along with the rest of their NFC rivals, will play each other two times each and then have matchups against the NFC West and AFC North. Since they finished in last place, Washington will also play two other last place teams in the Lions and Panthers. According to the NFL strength of schedule rankings, Washington faces the fifth-easiest schedule in 2020, with their opponents combining for a .465 winning percentage last season.

Washington begins their season with a home game against the division-rival Eagles, before heading on the road to face the Cardinals and Browns. The Redskins will face tough home games against the Ravens and Cowboys to highlight their pre-Week 8 bye schedule. Following the bye, the schedule starts off with three teams who picked in the top-four of the draft in the Giants, Lions and Bengals, with the Detroit game happening on the road. Then things get tough with three straight road games, starting with a Thanksgiving Game versus the Cowboys before trips to play the Steelers and 49ers. Washington’s season wraps up with two more home games and then a final road game in Philadelphia.

It’s clear from the amount of departed veterans that the Redskins are in the middle of a rebuild. However, Rivera is a proven coach who wants to return them to glory as soon as possible. Lots of pressure will be on QB Dwayne Haskins, who after an uneven rookie year will aim to build into a franchise signal-caller. Additionally, the team still boasts productive vets like RB Adrian Peterson and EDGE Ryan Kerrigan to lead them going forward.

Even though the strength of schedule says otherwise, it’s actually a fairly difficulty schedule for Washington. They have five games against 2019 playoff teams, plus two games against the Cowboys and tough road games against the Steelers and Cardinals. There may only be about three games in which they will be favored as well. Unless Haskins takes significant steps forwards, the Redskins still seemed to be near the bottom of the standings, making the UNDER 5.5 wins seem like the safer bet.

RealBookies.com Prediction: Take the Redskins UNDER at Becomethebookie , our favorite pay per head bookie site.