CFB NFL Vs. NCAAF Betting: What Are The Differences? 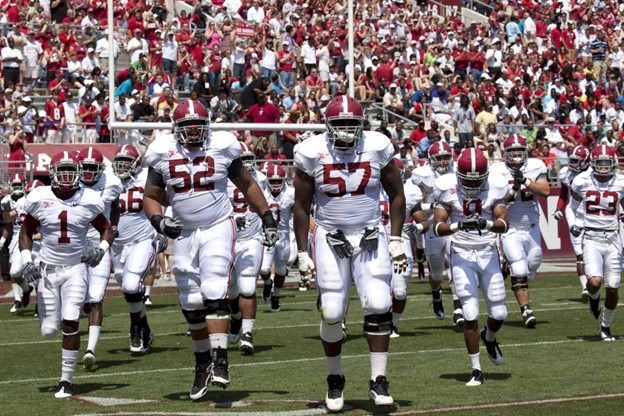 Both the NFL and NCAAF are two of the biggest sports leagues when it comes to attracting gambling in the United States. The NFL Super Bowl gets all the attention and sponsorship deals due to the high level of professionalism in the league, while the college football league (NCAAF) is credited for its exciting games and preparing future stars for the NFL.

With most states in the US legalizing online gambling, NFL betting has become one of the most popular options for people looking to make some bucks from sports betting. However, with the 32 teams only playing 17 games in the course of an 18-week season, the NFL is becoming less profitable for bettors. But thanks to the over 130 division 1 college football teams, bettors get to enjoy more game selections throughout the season and more options to wager and win money.

As the American football gambling market grows, young and inexperienced gamblers are caught in-between the lines on which of the leagues offers more chances of winning. This article will dissect this by providing useful information about them and what punters can expect.

Difference Between NFL And NCAAF Gambling

Here are some tips to guide you when picking between the two biggest American football leagues as a sports bettor:

The amount of media coverage the NFL gets is massive. Everyone in the country wants to know the fitness level of their teams before placing any bet. This hunger for information pushes the media into searching and releasing weekly updates on every team.

In these weekly updates, punters will discover which players are fit or injured and how the weather can affect each game. With so much information available for everyone, gambling houses tend to use it to their advantage to control the odds, reducing the profitability margin for anyone betting on either side to win or lose.

Some might ask, are these updates and information not good for betting? Yes, they are, but they eliminate the underdog factor, which most gamblers take advantage of to win big scores. Also, the ability of the professional league to retain players is often seen as a plus for gamblers. The longer a player represents a particular team, the more predictable they become. With so much NFL news and facts on the web, gamblers can easily predict how far a player can run or throw by checking their previous season records.

Here the media coverage is very limited except for the big teams/colleges. With the low media coverage, experienced bettors tend to go the extra mile searching for information to win games. The smaller the team, the less attention it gets from the media. This fact takes away the advantage from sportsbooks and hands it to bettors who are determined to win.

In college football, teams with low coverage are regarded as underdogs. This means that when they play against the bigger teams, there are usually huge differences in the odds. Going the extra mile to get information not made available to the public about both teams can greatly increase your chances of winning bigger rewards.

One major disadvantage of gambling on college football is the insufficiency of data. The NCAAF is designed in such a way that players tend to come and go every season. For this reason, predicting the outcome of a team is very difficult because their gameplay changes every season due to the incoming and outgoing of some of their best players. This creates a lot of headaches for those betting on the league.

The distribution of talents between these two leagues is huge. In the NFL, players are picked by drafting the best college football players in the country. This means that almost all the teams are evenly matched, creating no room for bettors to take advantage.

The way the draft picking works is that when a team has a bad season, it goes all out in the draft to pick the best players. For example, the Miami Dolphins, who have been winless all season, stand a greater chance of picking the best college quarterback in his first overall draft. Other teams having a great season will not need a QB, leaving them with the option of reinforcing their defenses by picking the best running back player the draft can offer.

Players in college football are widely unevenly matched. Here players are not picked or selected through a drafting system. They are picked by coaches from colleges with good sporting programs. This means that not all colleges get to pick the best as the top talents are very few compared to the number of colleges needing them.

This uneven distribution of talents creates a loophole for gamblers to score big wins. For example, small teams are left with weaker players with little or no chance of winning matches if the best colleges get to have the best players and coaches. This results in ease for bettors to wager without fears of losing.

In the NFL, there are just 32 teams across 8 divisions. This makes it easier for gamblers to analyze and place a wager on their preferred teams. With this number of teams, players get to play only 17 games in the regular season.

This means you don’t have to be a genius in analyzing teams to know who will make the best bet. The handicaps market is also better when gambling on pro football due to these factors.

In college football, teams get to play more games in and out of the season, increasing the probability of players getting injuries and affecting the game’s odds. In the NCAAF, 130 college teams across 10 conferences play almost every week. This limits the number of handicaps most sportsbooks offer to bettors.

So if you are looking to gamble on college football, concentrate on at least one or two conferences to stand a better chance of winning.

The NFL and NCAAF are important football leagues to stake and win big. However, knowing the pros and cons of each league are important to your success as a bettor.

When considering their differences, you should also evaluate other factors that might affect your success as a punter and take note of them accordingly.