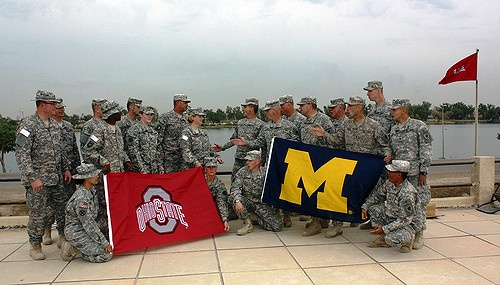 It’s been an up-and-down season plagued with injuries for both the Michigan Wolverines and Ohio State Buckeyes and the teams will battle each other on Sunday afternoon with a chance to improve their standings. Seeds 5-8 in the Big Ten Conference get a bye on the first day of the conference tournament and that’s exactly where both teams reside currently heading into the final three games of the regular season. Ohio State is the No. 7 seed as of Saturday afternoon and is coming in with wins at home over No. 8 and first place Maryland on Sunday and on the road Thursday at Nebraska. The Wolverines are pretty hot despite a 81-74 loss at home to Wisconsin on Thursday night. Prior to that setback, Michigan had won five in a row and seven of eight, while going 6-2 ATS in their last eight. The Buckeyes went into Ann Arbor on Feb. 4 as three-point underdogs and came away with a 61-58 victory. Michigan has lost their last three trips to Columbus.

Michigan’s leading scorer is Isaiah Livers at 13.4 points per game despite playing in just 18 games because of injuries and missed the first meeting with Ohio State. Ohio natives Zavier Simpson and Jon Teske have their last shot to win for the first time in Columbus and Simpson is coming off a huge game versus Wisconsin with 32 points, six assists and five rebounds. Freshman guard Franz Wagner was the only other double-digit scorer on Thursday with 17 points – his fourth-straight 10+ performance. The Wolverines played Thursday without guard Eli Brooks, who had started each of Michigan’s previous 27 games before sustaining a broken nose Feb. 22 at Purdue. Michigan will host Nebraska next week before closing the regular season at Maryland.

Ohio State is getting improved play from the guard trio of CJ Walker, Duane Washington Jr. and Luther Muhammad, who combined for 38 points and 14 rebounds against Nebraska, a game they played without forward Kyle Young, who rolled an ankle Sunday and he’s doubtful to return against Michigan. Kaleb Wesson leads the team with 14.0 points a game and recorded 23 points and 12 rebounds while limiting Teske to three points in the first meeting. Freshman E.J. Liddell played 20 minutes off the bench versus Nebraska and contributed eight points, five rebounds and five blocked shots. Ohio State will host Illinois and play at Michigan State to finish the regular season.

Both teams are playing well, but the Wolverines have a tough time in Columbus, losing their past three there and Ohio State’s defense allows only 36.8 percent shooting at Value City Arena. I’ll lay the points.