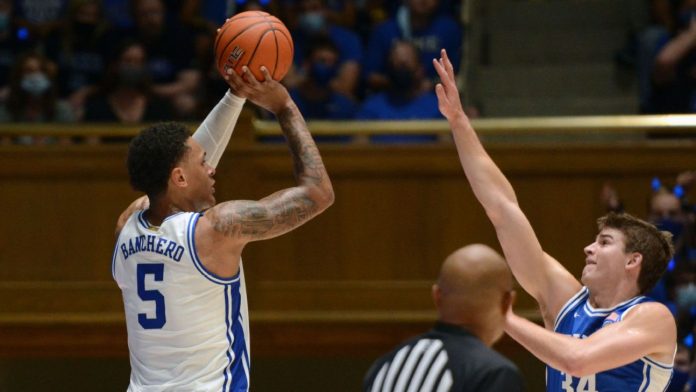 Two storied programs that failed to make last year’s NCAA Tournament will meet in a top-10 matchup Tuesday night to open the 2021-22 season. The ninth-ranked Duke Blue Devils will play the No. 10 Kentucky Wildcats at Madison Square Garden in New York. This will be Mike Krzyzewski’s 42nd and final season as head coach of the Blue Devils and he’ll be showered with gifts and standing ovations all year long. Duke has made it to 12 Final Fours and won five national championships under Coach K., but last year was forgettable. The Blue Devils limped into the ACC Tournament with an 11-10 record, won the first two games, then were forced to forfeit after a player tested positive for Covid-19, ending the season. This should be a much better year with a few leftover starters and the No. 1 recruiting class in the conference.

Kentucky had one of their worst seasons in years, finishing 9-16 and making just 45.5 percent of their two-point shots and rarely taking 3s. They also had a hard time beating difficult opponents, going 2-9 against KenPom top 50 teams. Kentucky finished 11th in the SEC in scoring (70.4) and 12th in turnover margin (-1.3), but head coach John Calipari has restocked the roster with a mix of size, speed and shooting ability. Duke and Kentucky have played five times since their last NCAA Tournament duel in 1998. The Blue Devils have won four of the five and are 3-2 ATS in that stretch. The over is also 3-2 in the last five regular season meetings.

With the new recruiting/transfer class, its hard to imagine Kentucky not making an impact in both the SEC and nationally this season. It starts with the best guards in the conference with Georgia transfer Sahvir Wheeler, Davidson transfer Kellan Grady and five-star recruit TyTy Washington, Jr. These players should immediately help an offense that was 84th a season ago in offensive efficiency – by far the worst ranking in Calipari’s 12 seasons in Lexington. The best long-range shooter is Davion Mintz, who made 38 percent from beyond the arc and averaged 11.5 points per game. The frontcourt lacks scoring, but should make up for it with rebounding and defense. Kentucky will play their next seven games at home beginning with Robert Morris on Friday.

Krzyzewski has spent a lot more time at home this past offseason because most of the recruiting has been handled by associate head coach Jon Scheyer, who will become the Blue Devils’ head coach next spring. Duke has two players on the All-Conference preseason squad including freshman Paolo Banchero and sophomore Mark Williams. Banchero is among the top-ranked freshmen in the country and should make an immediate impact. The Blue Devils had no problem scoring last year, averaging 76.0 points a game, but the other end of the floor ranked 12th in the conference with 71.3 points allowed per contest. There’s no reason to think Duke can not get back to making a run at the Final Four this season. The Blue Devils have a bunch of cupcakes coming up at home starting with Army on Friday.

Both of these teams should have bounce back seasons, but which one will start off with a win. I’m picking Duke in this one. Coach K’s players are going to go all-out in these big games for him beginning with the last scheduled game for the coach at MSG. Kentucky’s offense will be improved, but not right away.