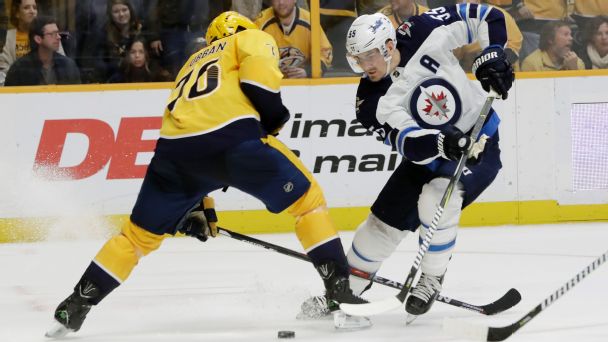 The Nashville Predators have dominated the Western Conference in the past two postseasons, but they may have finally met their match in the Winnipeg Jets – the lone Canadian team still standing. Nashville recorded 48 shots on goal and dominated possession for most of Friday’s Game 1, but it was the Jets – the No. 2 seed in the West behind Nashville – who took advantage of scoring chances in a 4-1 victory. While Winnipeg managed just 19 shots on goal, its speed put them in position to beat Nashville goaltender Pekka Rinne, who was pulled after allowing three goals in two periods. This postseason is starting to make Jets’ goalie Connor Hellebuyck a star, as he followed up back-to-back shutouts to close out Minnesota in round one with a franchise playoff record 47 saves. Kevin Fiala’s third period goal ended Hellebuyck’s shutout streak at 163 minutes, dating back to Game 3 against the Wild.

Winnipeg center Mark Scheifele continues to shine, netting two goals for the second time in three games in the series opener to give him six points (five goals) in his past three games. Forward Blake Wheeler recorded two assists and finished a +2, one of 11 Jets who ended the night with a plus rating. Hellebuyck was the star of the game, but the Jets defense blocked 26 shots (16 coming from defensemen Jacob Trouba, Tyler Myers, Ben Chiarot and Josh Morrissey). Defenseman Toby Enstrom blocked two shots and played 18:05 in his postseason debut after missing time with a lower-body injury.

Nashville won 66 percent of the game’s faceoffs but defenseman Ryan Ellis was the only Predators player to finish with a plus rating (+1). Four Predators recorded five or more shots on goal (forward Filip Forsberg and defensemen Mattias Ekholm, Roman Josi and P.K. Subban), and Forsberg had a chance to get the Preds back in it, but hit the crossbar late in the second just before Scheifele’s first goal made it 3-0. Forward Austin Watson – who is tied for the team lead in playoff points (seven) – left Game 1 after playing just 4:09, but practiced Saturday and is expected to play in Game 2.

As good as Hellebuyck is playing, there’s only so many shots he can face before they start going in. Nashville will play the same way they did in Game 1 and get a win here, because if they don’t, they have to go to Winnipeg – who is the best home team this season – down 2-0. Nashville is too good to lose two-straight home games.