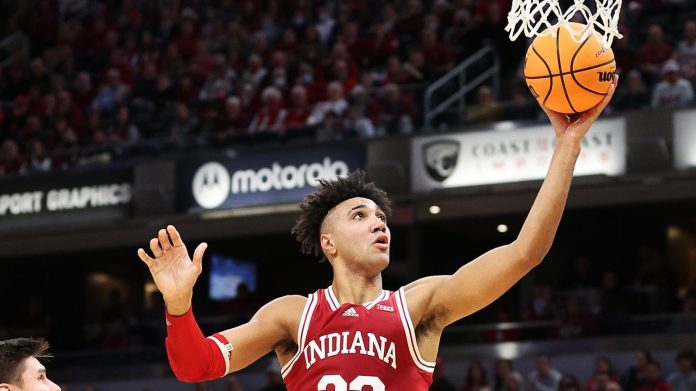 The NCAA Tournament tips-off on Tuesday night in Dayton, Ohio with two games. One of them is the always interesting 12 vs. 12 matchup to determine who will land in the field of 64 later this week. The Indiana Hoosiers take on the Wyoming Cowboys out of the Mountain West Conference with the winner facing Saint Mary’s CA on Thursday in Portland, Oregon. The Hoosiers were a bubble team going into the Big Ten Tournament, but pulled off upsets over Michigan and Illinois before losing to eventual champion Iowa in the semifinals. Indiana has five national titles, and is making its first NCAA Tournament appearance since 2016. The Hoosiers had lost four of its final six games in the regular season – all by five points or less. Indiana is 39th in the NCAA NET rankings and 4-8 in Quad 1 games.

Wyoming finished fourth in the Mountain West Conference under second-year coach Jeff Linder, but the conference was strong enough to warrant an at-large bid. The Cowboys are coming off a 68-61 loss to Boise State in the MWC tournament semifinals and are making their 16th NCAA Tournament appearance in school history and first appearance since 2015. Wyoming had as many Quad 1 wins (four) as Indiana this season and registered three more Quad 2 wins than the Hoosiers. Wyoming was strong in close games this season, winning eight of ten that were decided by five points or less. Indiana and Wyoming haven’t played since 1999, when Indiana won 99-80 as a 16½-point favorite.

The Hoosiers are led by Trayce Jackson-Davis, who was named to the All-Big Ten tournament team behind his 25.3 points and 8.7 rebounds over the three games. On the season, Jackson-Davis led the team with 18.1 points a contest and also 8.2 rebounds per game. Point guard Xavier Johnson has also played at a high level for the Hoosiers late in the season, scoring in double figures in eight straight games (18.1 points and 6.8 assists). Reserve Jordan Geromino, who has averaged 3.9 points and 3.4 rebounds in 32 games, is questionable due to an injury. He also leads the team with 32 blocks.

Wyoming has a strong scoring duo in sophomore center Graham Ike and guard Hunter Maldonado. Ike is just one of four players nationally to average more than 19 points and six rebounds a game (19.6 ppg, 9.6 rpg). Maldonado is averaging 18.4 points, 5.8 rebounds and 6.3 assists for the Cowboys. Wyoming was 8-5 in true road games this season and 3-2 in neutral site contests. Overall, they were 11-7 against the spread away from home, but are just 3-6 ATS in their last nine games overall. The Cowboys play solid defense, allowing just 65.5 points a game and hold opponents to 30 percent from beyond the arc.

Not many people give the Mountain West Conference much of a chance in the tournament, and for good reason. The conference doesn’t have a good track record, but I like Wyoming in this matchup. They play good defense and have two big-time scoring threats. They also play a lot of close games. I’ll take the points.