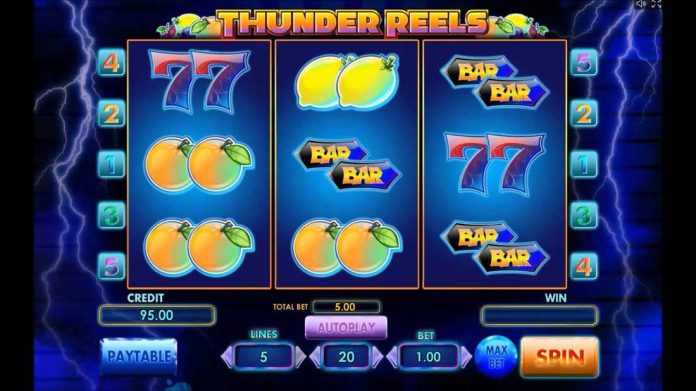 Thunder Reels Slot was developed by Playson in June 2016. Playson is one of the igaming industry leaders with the head office being based in Malta but with a presence across Europe.

Despite Thunder Reels not being a particularly old game, there are older online slot games out there; the feel of it is that of an old arcade game. The game is a three reel, three row, five pay line slot with a classic fruit machine feel to it. Available on all devices, mobile, tablet and desktop, Thunder Reels offers a Return to Player percentage at a high 96.13%. The game isn’t for the player who wants all singing, all dancing 3D animations, graphics and sounds are what they want but for the player who wants the traditional fruit machine experience then Thunder Reels at Diamond Jackpots is perfect.

As with a lot of games like Thunder Reels the seven is the highest value symbol on the reels. If the player lands three of these then they will be awarded a 750-credit pay out. Landing three gold starts will award the player with a 200-credit pay out and three BAR’s will give a 60-credit pay out. The X’s are the lowest value symbol and will pay out after a player lands either three or five. Due to Thunder Reels taking on the look of an old slot machine the symbols are traditional and therefore the game has symbols of fruit on the reels. Three fruits will reward the player with a 40-credit pay out and any matching combination either horizontally or diagonally can up the winning chances. If the player lands the same symbol across the entire grid it could potentially double the winnings meaning that instead of a 750-credit award it then becomes a 1500 credit award.

The bonus feature is triggered every time there is a win; it is in a fairly standard format to easy to understand. The player has to choose the correct colour of the card in order to double their win. Alternatively, they can also take a chance on the suit of the card too in a attempt to quadruple the prize. Thunder Reels is one of the few games that allows players the opportunity to guess on the colour and suit of the card up to ten times, most games usually only allow five guesses, with the additional number of guesses the player doubles their chance in winning and multiplying their winnings by either two or four depending on their luck.

Despite Thunder Reels being designed on the look and feel of an old school slot, the game is one of the most popular games in the market. The simplicity of it means its perfect for the beginner or the seasoned player.

Why Should You Play at an Online Live Casino? Here Are 7 Reasons