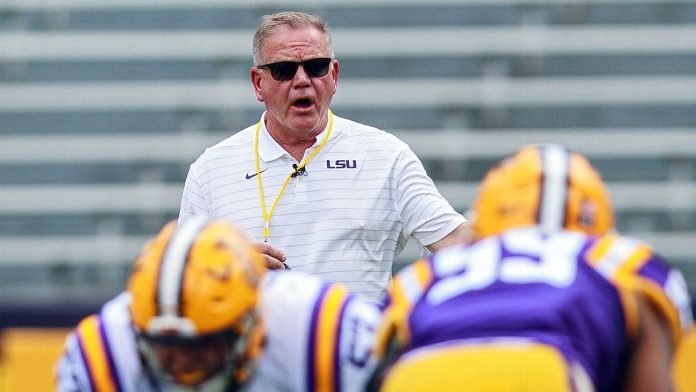 Labor Day Weekend in College Football means we have games on Sunday and Monday night to kickstart the season. The Sunday night matchup this season is an intriguing one with two powerhouse programs looking to get back on track after a few sub-par seasons. The Florida State Seminoles take on the LSU Tigers in the Allstate Louisiana Kickoff in the Caesars Superdome in New Orleans. Head coach Brian Kelly makes his LSU debut after leaving Notre Dame for a 10-year, $95-million deal. Kelly was the Irish’s all-time winningest coach and will look to have similar success, if not more, in Baton Rouge.

Florida State is already off to a good start with a 47-7 win over FCS opponent Duquesne in Week 0. The ‘Noles had three 100-yard rushers for the first time in school history, and won their season opener for the first time since 2016. Jordan Travis returns for another season as the starting quarterback for the Seminoles, but he didn’t need to do much in last week’s dominating victory. Florida State is coming off a 5-7 season and haven’t finished with a winning record since 2017 (7-6). The Seminoles lead the all-time series 7-1 but haven’t played each other since 1991. Florida State has won just four road games in the last four years, but this game is technically a neutral-site contest. LSU is 10-2 in regular-season games in the Superdome.

Florida State ran all over the Dukes last week behind Treshaun Ward’s career-high 127 yards on 14 carries, Trey Benson’s 105 yards and Lawrance Toafili’s 101. The last ACC team with three 100-yard rushers in the same game was Clemson in 2018. The Seminoles hadn’t recorded 400 yards rushing and 200 yards passing in the same game since 1995. The running game will be key against LSU, as the Tigers will try and keep the elusive Travis in the pocket. Travis was 11-of-15 for 207 yards and had four carries for 11 yards and a touchdown. The Seminoles held Duquesne to 164 yards of total offense and 1-of-10 on third down conversions. Florida State will play at Louisville in two weeks.

Kelly has declined to publicly name a starting quarterback for Sunday’s game even though he said he chose between Arizona State transfer Jayden Daniels and redshirt freshman Garrett Nussmeier last weekend. Daniels is a transfer from Arizona State, where he threw for 6,025 yards and 32 touchdowns in three seasons, while Nussmeier saw very little action as a backup last season for the Tigers. LSU will begin this season without John Emery, who was projected to be the top running back. He will miss at least two games after missing all of last season because of academic issues. True freshman Will Campbell will start at left tackle after being the top-rated player in Louisiana coming out of high school. The wide receiver group is deep and Kelly said he could use seven or eight players at that position.

The Kelly era is underway and I believe it begins with a victory. Kelly has been a winner throughout his career and will have this team ready. Florida State will not be able to run the ball like they did last week. LSU by a touchdown.