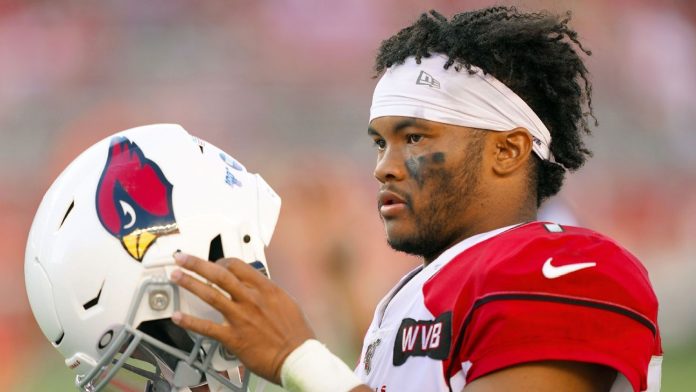 Head coach Doug Pederson has injected new-life into the Philadelphia Eagles, but it may be a little too late. Pederson benched franchise quarterback Carson Wentz prior to last week’s game versus the New Orleans Saints and Jalen Hurts guided Philadelphia to a 24-21 victory, keeping their postseason hopes alive. The former Oklahoma star will go up against another Sooner in Kyler Murray and the Arizona Cardinals on Sunday afternoon. Philadelphia is only one game back in the loss column behind NFC East leader Washington with three weeks remaining and those teams will play in Week 17. In the upset of the Saints, Hurts became the first quarterback in the past 70 years to throw for 150 yards with a passing touchdown and rush for 100 yards in his first career start. Pederson has already named Hurts the starter this week – at least. Murray won the Heisman at Oklahoma in 2018 and was the top pick of the NFL draft by the Cardinals before last season. He helped Arizona snap a three-game losing streak last week with a 26-7 triumph over the New York Giants on the road. The Cardinals are currently the seventh seed in the NFC. The Cardinals’ defense recorded eight sacks last week, while Murray ran 13 times for 47 yards.

The two teams last met in 2017 with the Eagles prevailing 34-7 at home, snapping a string of six straight covers by Arizona in the series. Sunday’s game shows a 6.5-point spread in favor of Arizona with a total at 49.5. Arizona had failed to cover the spread in each of their last five games prior to last week’s win over the Giants and the under has cashed in three of their last four. The under is 6-1 in Philadelphia’s last seven games overall.

Philadelphia’s defense stepped up last week versus New Orleans, sacking Taysom Hill fives times. With 43 sacks on the season their defense now sits only behind Pittsburgh in that category. The team however, is 27th in red zone defense and 31st in turnover differential. They are good at slowing down passing games, ranking eighth at 220.6 yards per contest allowed. The offense is ranked 27th in scoring (21.3) and 28th in passing (199.8), but Hurts has given the team a spark. Hurts had 167 passing yards and a touchdown on 17-of-30 completions in the win last week, but also rushed for 106 yards on 18 carries. The season-ending injury suffered by Philadelphia right tackle Jack Driscoll in last week’s game against New Orleans means the Eagles will set an NFL record with its 13th different offensive-line configuration on Sunday. Matt Pryor will return to the starting lineup in place of Driscoll, who suffered an MCL knee injury against the Saints. The Eagles are also dealing with injuries in the secondary. The team put safety Rodney McLeod on injured reserve Wednesday, while cornerback Avonte Maddox (knee) is going to miss some time. CB Darius Slay (concussion) missed Wednesday’s practice and defensive tackle Malik Johnson (concussion) was limited.

Hassan Reddick, a 2017 first-round pick, recorded five sacks and three forced fumbles in the win last week over the Giants. That earned him NFC defensive player of the week honors. Overall, Arizona’s defense ranks 11th in the league with 344.5 total yards allowed per game and fifth in opponents’ yards per pass at 6.3. Murray threw for 244 yards and a touchdown without an interception on 24-for-35 passing. Wideout DeAndre Hopkins has 94 receptions on the season for 1,155 yards and five touchdowns. DL Jordan Phillips (hamstring) was a non-participant Wednesday, joining LB De’Vondre Campbell (ankle), CB Dre Kirkpatrick (hamstring) and S Jalen Thompson (ankle). The Cardinals will host San Francisco next week.

Murray has the talent and experience over Hurts, but it’s the Philadelphia defense that is starting to play well and will be the difference. Hurts will make enough plays to keep this a one-score game.