NBA Basketball News, Odds, Previews, and Free Picks Do You Remember the Time Vince Carter Walked Out on Puma? 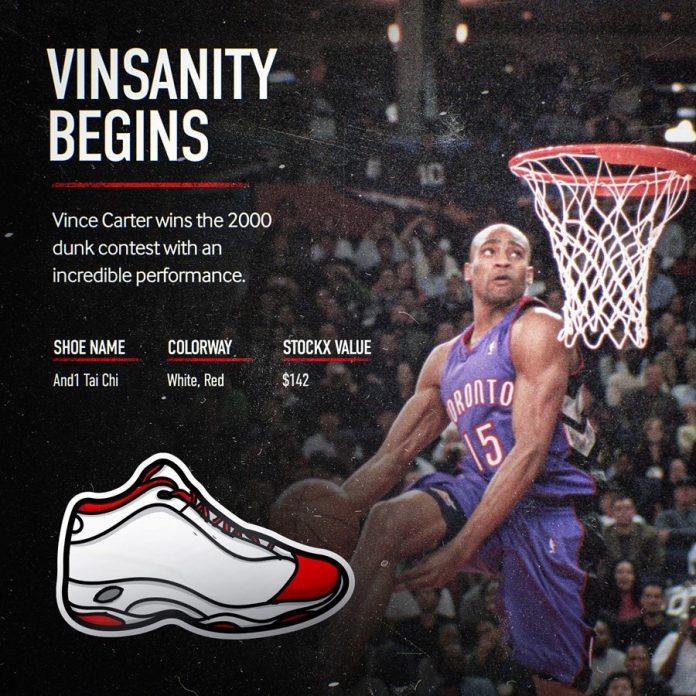 Vince Carter burst into the NBA during 1998-99 player lockout shortened season with the Toronto Raptors. Needing a boost after three losing seasons, the Raptors traded Antawn Jamison on draft day to the Golden State Warriors for the dunk highlight reel. Carter would make an instant impact in the NBA winning the Rookie of the Year award in 1999 and a season later, led the Raptors to their first ever winning record. The team also made the Eastern Conference playoffs in 2000 with Carter looking like the next big star and possible face of the NBA.

More than just dunks, Carter could score basket from the field. However, it was his incredible Dominique Wilkins-esque rim rockers that led the Raptors to trade for him.

As a rising NBA star, Carter was wined and dined by the top shoe companies upon entering the Assocation. While many of the top players would have gravitated toward Nike, Carter surprised everyone by signing a deal with Puma, a shoe company with a limited history in the NBA and known more for being a popular lifestyle and soccer brand.

Prior to ever inking his NBA contract with the Raptors, Carter and Puma signed a 10-year deal to produce signature sneakers. What was developed was the Puma Cell which due to the NBA’s 1998-99 lockout didn’t see Carter wear them until the final 50 games of the campaign.

The Puma Cell VI, which was dubbed the Vinsaity, was the player’s first official signature shoe and was set to be debuted during the 1999-2000 season. There was one problem, however, Carter didn’t like the way in which the Puma branded shoes fit and complained about foot pain. The Puma Cell VI shoes would go on to be the best-selling Puma basketball shoe ever made.

By the end of November, the Vinsanity shoes were off of Carter’s feet with Puma suing the basketball star for breach of contract. Carter had reportedly earned nearly $37 million during his less than two years of wearing Puma’s Vinsanity shoes but after the break-up with the sportswear brand, was forced to pay back $13.5m in damages.

it wasn’t just the fit of the Puma-made shoes that hurt Carter. He was angry with the brand for not marketing the shoes more heavily and getting them into stores before the 1999-2000 NBA season.

Having broken up with Puma, Carter still wasn’t done with an NBA outsider. On the verge of signing a massive deal with Nike that would have seen the American brand pay off the debt to Puma, Carter threw everyone a curveball by signing to AND1. Up to that point, AND1 had been a company selling t-shirts with its logo and various basketball clichés scribbled across them. The company branched out, however, with other apparel which included footwear.

After joining the upstart brand, Carter began lacing up the AND1 Tai Chi. The Tai Chi was the company’s first-ever basketball shoe model, according to Betway, and it launched a trend of amateur and professional players wearing the AND1 brand. Carter wore the signature Tai Chi shoes to soar above the rim and win the 2000 Slam Dunk Contest to solidify the brand’s status as the shoe company of the future – or at least of the 2000s – in basketball.