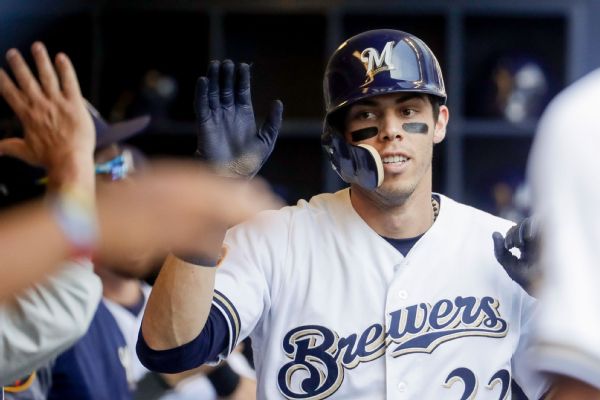 The Washington Nationals have been one of the biggest disappointments in all of baseball this season, but have a chance to make their move in the National League Wild Card race this weekend when they visit the Milwaukee Brewers for the first of three Friday night. Washington is coming off a confidence-grabbing series win at Philadelphia this week, winning three of their last four and averaging over seven runs a game in that span. A series sweep is almost a must, as they’re 7.5 games behind the Brewers, who own the second NL Wild Card spot by 1.5 games over Colorado. Lorenzo Cain extended his hitting streak to a career-best 12 games with a go-ahead homer in the 11th inning of Thursday’s 2-1 win over Cincinnati as the Brewers improved to 7-3 in their last 10. Milwaukee starter Jhoulys Chacin can match his career-high of 14 wins on Friday, while Nats right-hander Tanner Roark has lost a career-most 13 games, but has been on a roll of late. Roark is hoping for more run support from his offense to notch his ninth win of the season.

Chacin is coming off a rough outing in which he allowed three runs on eight hits and four walks over six innings in a loss to Pittsburgh. In his previous two starts at NL Central-rivals Chicago and St. Louis, he pitched 13 scoreless innings, allowing just seven hits. Chacin is 4-2 with a 3.06 ERA against the Nationals including 5.2 innings of one run ball on July 23rd.

Roark was saddled with a 3-0 loss at the New York Mets last Saturday despite allowing one run on four hits over six innings. He has surrendered just eight total earned runs over the last seven outings, including a win at Milwaukee on July 25th in which he struck out 11 over eight scoreless innings.

You have two hurlers here who are pitching extremely well right now, but the Nationals don’t seem to back Roark, and that can get frustrating. Milwaukee has scored seven runs or more in three of their last four and should be able to get enough off Roark for Chacin to pick up another victory.