The day is neigh. It is finally upon us.

The College Football National Championship Game is here and for the most part, the two contestants are the ones we had suspected since the middle of the season.

The Clemson Tigers will head over to the Mercedes-Benz Super Dome in Atlanta Georgia to face the LSU Tigers in what amounts to a road game for the defending national champions. They opened up as 5.5-point underdogs at the best sportsbooks around the world but have since fallen further and can be found at +6.5 at a few shops.

Biases play heavily into how people view a football game. Not being a fan of either Ohio State or Clemson I was watching the game objectively and felt like Ohio State got shafted pretty hard on a few calls/no calls. A couple of which were game-changers. Still, Clemson barely got out of that one alive. It was a great game; a battle to the end. On the flip side of things, LSU continued to due what they’ve done all season: systematically destroy whoever is set in their path. They absolutely crushed the Oklahoma Sooners. Most people knew that LSU would win fairly decisively, but putting up 63 points on the No. 4 team in the country … that’s a troucning. And it isn’t like this is the first time that LSU has battered a great team. They’ve done it in the SEC all season long. Averaging over 50 points per game for most of the season. Clemson, is averaging 45.29 points per game, but literally, the only good team they’ve played this year is Ohio State, and they did not get close to the 40s in that game, putting up just 29.

The Clemson Tigers are underdogs for the first time this season. But if you remember their National Championship game against ‘Bama, the Clemson Tigers were listed as 5-point dogs and they came in and smashed the Tide 44-16. So, just because their only real test this season has come against Ohio State, they should by no means be counted out.

Stats to be Aware of

One thing of concern for Clemson is Joe Burrow. The guy has had an eye-popping season and pretty much every match-up analysis has said something along the lines of, ‘to beat LSU you have to get pressure on Burrow. Well, every single team has had that game-plan and gues what? It hasn’t worked. Against the Sooners, he went 21 of 27 and dropped 403 yards and 7 touchdowns on Oklahoma in the first half … Wow! 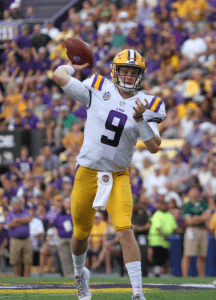 But the LSU secondary is their weak link. They allow a bit over 221 yards per game, and we know that Lawence can chuck the pig skin downfield. He didn’t find any passing room against Ohio State, and instead lifted the team up on his legs and got the job done on the ground.

I do like LSU to win this one so I’ll be laying a couple of units on the ML. That said, the spread makes me nervous. I feel that it is locked right in and could easily fall on either side.

The bottom line is, Clemson is not going to be able to stop LSU from scorin well into the 30s. That said, just like Doug Upstone for SBR mentions,  Venable’s secondary should be able to hang with LSUs receivers fro the most part. So it’s doubtful that the Tigers of Louisiana get up into th 40s or 50s in this one.

The Total is way up at 69.5 and despite the scoring potential of each of these teams, they both have stout defenses. Ohio State rolled the Big 10, but only put up 23 on Clemson. Georgia only managed 10 against LSU, Auburn 20, Florida 28, and a Hurts-led Oklahoma just 28.  This one should fall just to the back side of the points total. That said, we should wait on it and watch the line. Currently 56% of the public is on the Over. That number could increase and as long as not too much smart money goes in the UNDER, it could hit 70 or 70.5 by close.

Watch the TOTAL line and wait. Take the Clemson vs. LSU UNDER.