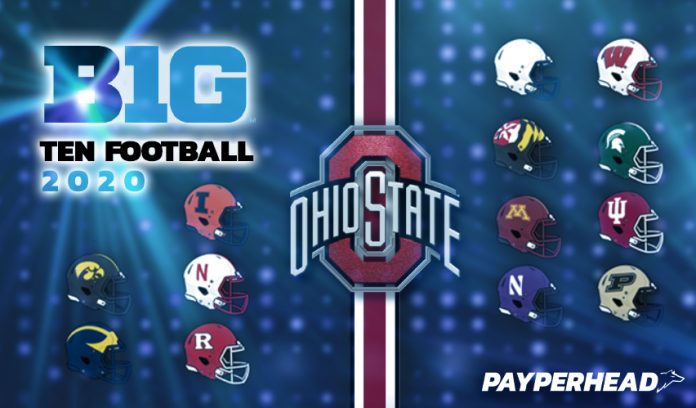 It was all but over for the Big Ten. Due to COVID-19, the conference canceled fall sports. Oddsmakers took bets off the board, and some athletes decided to declare for the 2021 NFL Draft.

And so begins the conversation about Big Ten’s top College Football Playoff contender, the Ohio State Buckeyes. Ohio State is so good they’re ranked on the AP Poll even though they haven’t played a single game.

Can anyone upset Ohio State when the Big Ten begins? The Buckeyes are -400 to win the conference. How good are the College Football Playoff chances for Ohio State or any other Big Ten contender? For bookies offering free betting software on Big Ten squads, here’s an update.

No. 6 Buckeyes Have Second-Best Path to Title Game

Ohio State has managed to stay in national title contention by merely existing. While Florida, LSU, and Georgia battle up and down the Top 25, the Buckeyes are hovering in the top 10. That forced oddsmakers to concede that Ohio State deserves the second-best odds to win the National Title at +250.

On October 17, No. 2 Alabama plays No. 3, Georgia. A blowout by either team could propel the Buckeyes into the top four. On November 7, No. 1 Clemson is at No. 4 Notre Dame. The odds will likely lean in Clemson’s favor. If the Tigers blow out the Irish, that will automatically propel an undefeated Buckeyes team.

As we said, the AP Top 25 rankings laid out a simple path for the Buckeyes to make the College Football Playoff. But it’s not an easy one. In just their second game, they face their biggest Big Ten rival on paper, the No. 9 Penn State Nittany Lions.

Penn State’s offense makes them Ohio State’s top rival. The Lions return eight starters, including dual-threat QB Sean Clifford. Clifford should provide a much better performance versus the Buckeyes in 2020 than he did in 2019 when he threw for just 71 yards. Even though their quarterback played awful, Penn State covered as 20-point dogs in a 28-17 loss.

College football betting action should be heavy on Ohio State, but Penn State is capable of keeping this game close. Make sure to pay attention to wagering on both sides in your pph sportsbook.

Wisconsin and Michigan have Top-10 Odds to Win Title

The other contenders in the AP Top 25 are the No. 16 Wisconsin Badgers and the No. 19 Michigan Wolverines. Wisconsin’s and Michigan’s odds to win the title make them a spoiler at best, though.

The Wolverines play the Buckeyes on December 12. The history of the Ohio State-Michigan rivalry could lead bettors to take a chance on a Wolverines cover. However, their previous meeting ended in a 56-27 blowout for Ohio State as 9-point favorites. Also, Michigan coach Jim Harbaugh has never beaten Ohio State as the main man in Ann Arbor.

Wisconsin could see the Buckeyes in the Big Ten Championship. Wisconsin is the favorite to win the Big Ten West. If they do take the division, they figure to face Ohio State or Penn State in the title game.

Bet on the Big Ten with Pay Per Head Software

The Big Ten is just a week away. Learn how bookies make money by offering odds on the conference before games kick off on October 24. Import your players and see how PayPerHead can help you make more money.